END_OF_DOCUMENT_TOKEN_TO_BE_REPLACED

The U.S. topped the WCI but also saw confidence fall by seven percent. The U.K. was a close second with India third – the only three countries to have an above global average score.

From a regional perspective, confidence in Latin America fell the most– down 21 percent since April – three times higher than the decline in Australasia (7%).

Although the overall Worldcom Confidence Index (WCI) score stabilised with a 1% increase, the WCI score for all 15 countries we feature fell since April.

China (down 21%), Italy (down 20%) and Brazil (down 19%) – all significantly impacted by the pandemic, saw the biggest falls in confidence since April. 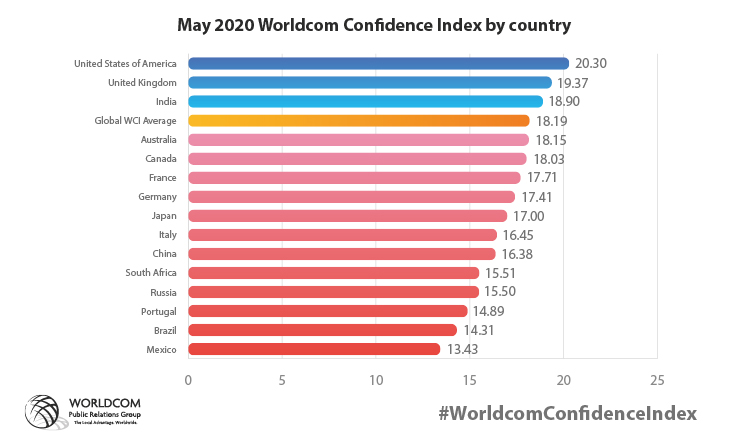 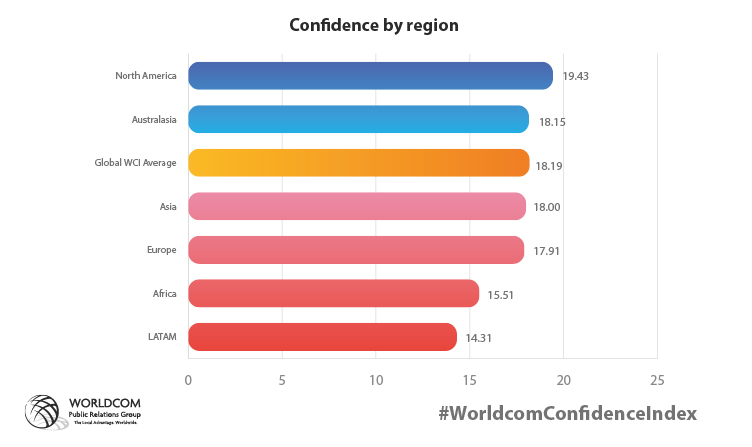 Four countries came bottom of the Worldcom Confidence Index for all the 23 topics monitored. Mexico was last for 12 topics, Russia and Portugal for four and Brazil for three. Leaders in France and the UK were much more confident, however. France came top of the WCI for nine of the 23 topics and the U.K. eight. 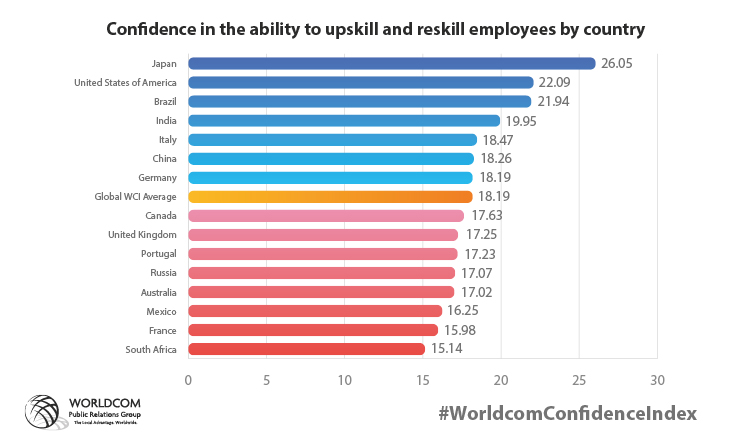 Engagement levels in people-related topics increased significantly since April. Upskilling and reskilling – the #1 topic increased the most (up 56%). This was closely followed by retaining talent – the #2 topic (up 45%); Economic migration – the #5 topic (up 32%); Improving productivity through employee engagement – the #6 topic (up 25%). The quality of employer brand – was the #7 topic (new topic in May) – which means that people issues took five of the top seven topics in terms of leader engagement in May.

Japan was the most confident country for customer satisfaction and upskilling and reskilling employees – both essential for a strong recovery to the current crisis. 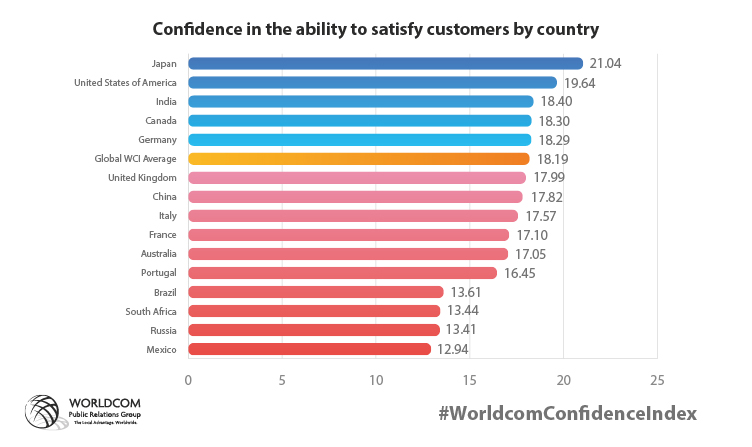 Although China saw the biggest fall in confidence, it was top for confidence in the ability to drive productivity through employee engagement . This will be another key requirement if organizations want to emerge strongly from the crisis. 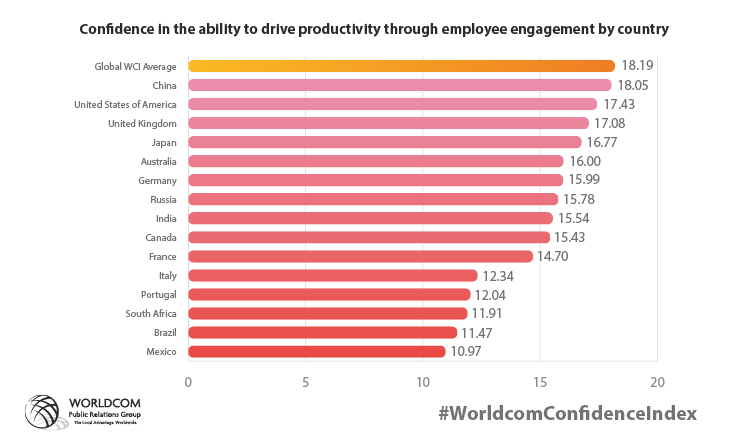 Leaders’ confidence in their ability to respond to government and legislative change took a further hit. The ability to manage a crisis also sees another drop in confidence

Confidence in handling government and legislative change fell by 17%. This is, perhaps, not surprising as governments continue to announce initiatives to fight the impact of COVID-19. This topic had the second biggest fall of all topics – and now the lowest on the Index .

Confidence in the ability to manage a crisis also declined significantly – down 15% and one place on the Index to the fourth lowest score. 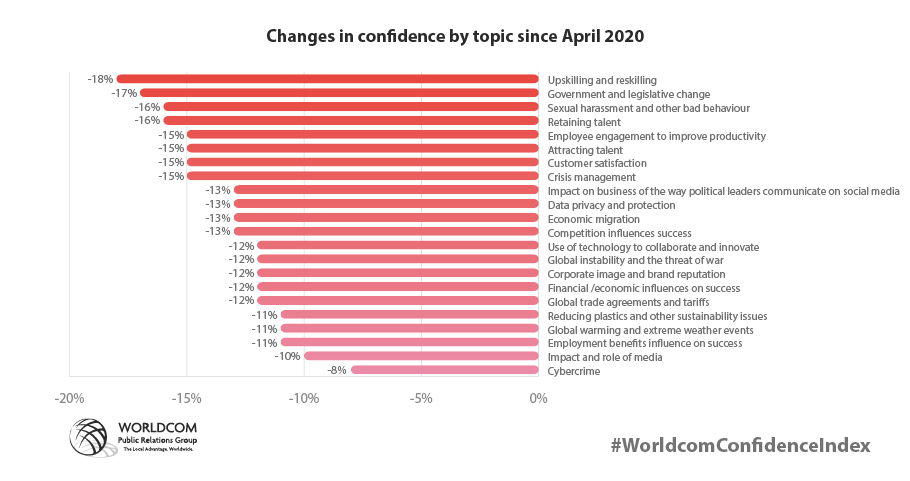 The Worldcom Confidence Index (WCI) is a living survey which uses Artificial Intelligence to monitor topics and sentiments from over 54,000 CEOs and CMOs around the world.  This month’s update to CEO/CMO confidence and concerns across 23 topics and six audiences show which issues are uppermost in their minds as they respond to the rapidly changing landscape of the COVID-19 pandemic. It shows the main changes since April 2020. The key findings for May 2020 are summarised below in The Worldcom Confidence Index 10.

Confidence levels declined for all 15 countries in the May study 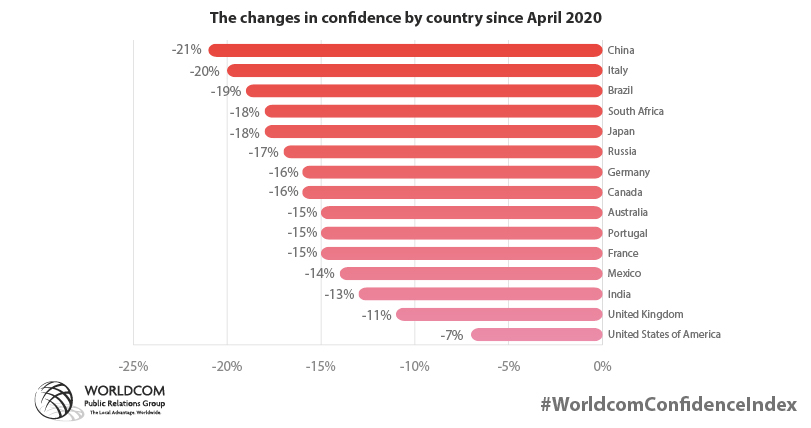 The U.K., India and the U.S. took top three places for confidence in handling cybercrime.

Leaders may be underestimating the increased risk of harm from industrialised cybercrime bearing in mind the rash of COVID-19 related scams and the number of people forced to work from home.

Influencers extended their lead as #1 audience for leader attention – up 10% since April, but customers, employees and governments also saw increases in attention 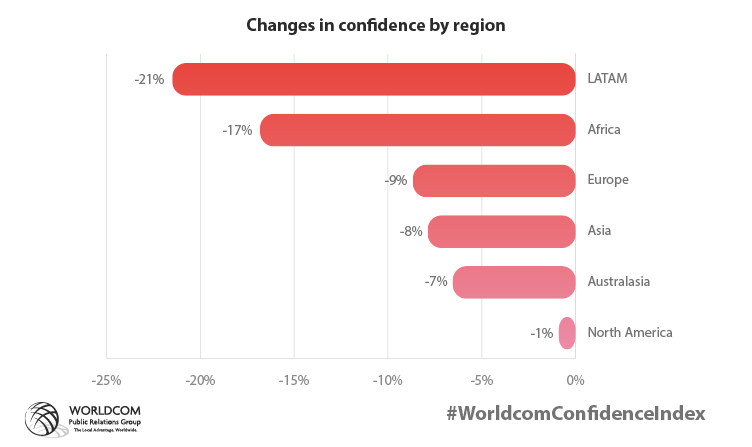 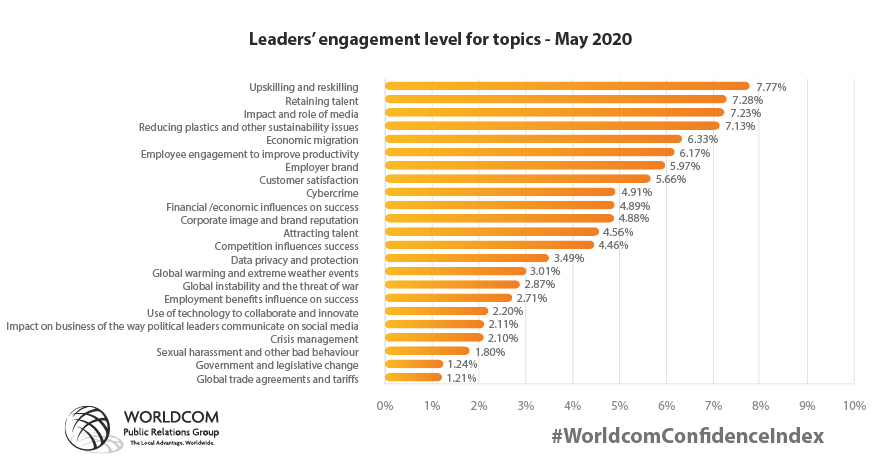 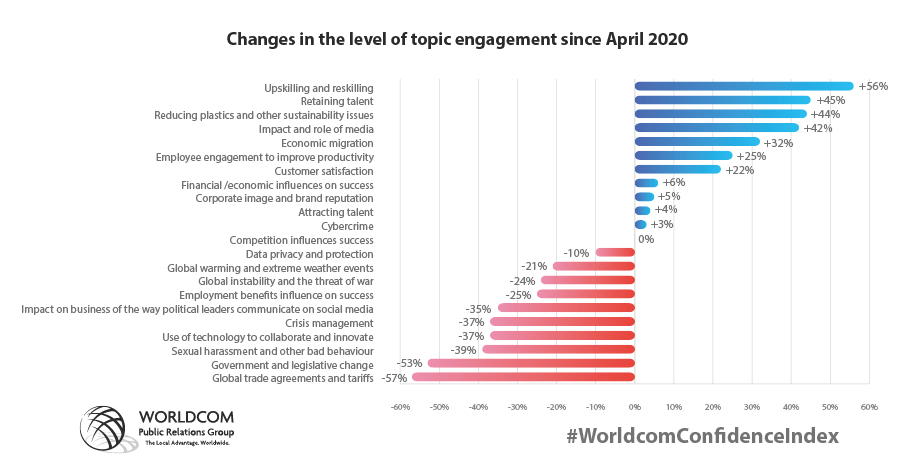 The results show that leaders are concerned about how to handle people issues that are central to a recovery. Confidence in upskilling and reskilling was down 18%. Confidence in how to retain the best talent was down 16% and how to make people more productive through engagement was down 15%.

Confidence in handling the media has fallen in May

The impact and role of the media saw a 42% increase in engagement by leaders making it the #3 topic. But confidence in handling the media fell by 10%.

The impact of the way political leaders communicate on social media had the third lowest score and declined a further 13% since April. 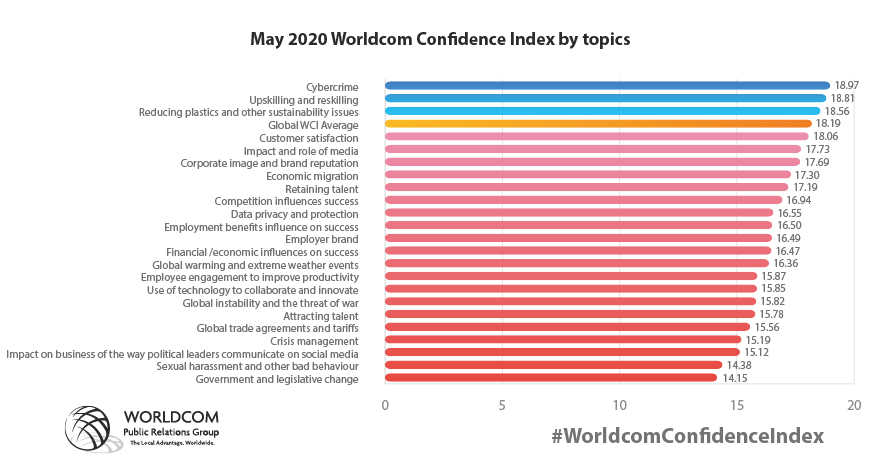 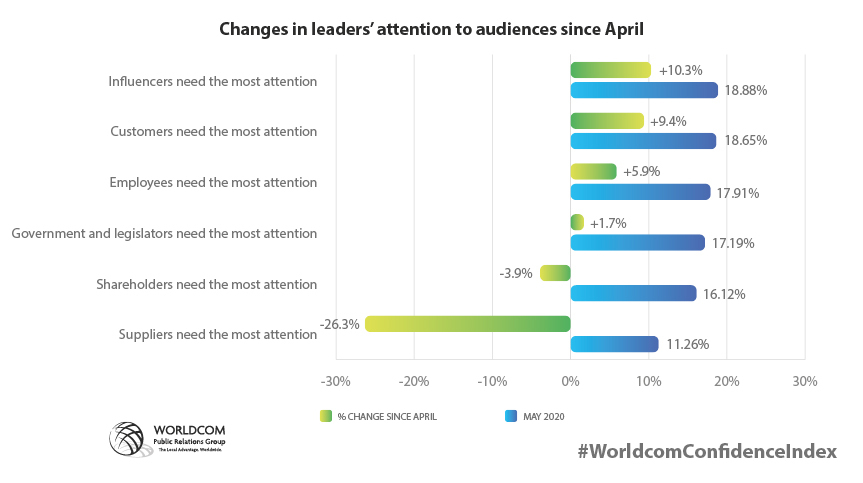 Confidence in the ability to satisfy employees fell by 10% – demonstrating the levels of uncertainty leaders have about the impact of the crisis on employees.

The topic engagement increased by 44% since April. This may be a recognition that people have become much more aware of environmental issues during the lockdown and seem keen not to return to the same behaviour as before the pandemic.

In relative terms, leaders seem more confident about handling this topic than most others. Despite a confidence decline of 11% the topic moved up to #3 on the Worldcom Confidence Index.

However, consumers are increasingly expecting organisations to take an active stance on topics like this and some organisation may need to be more proactive or lose consumer confidence in them.

Leaders over the age of 55 remain the most confident. 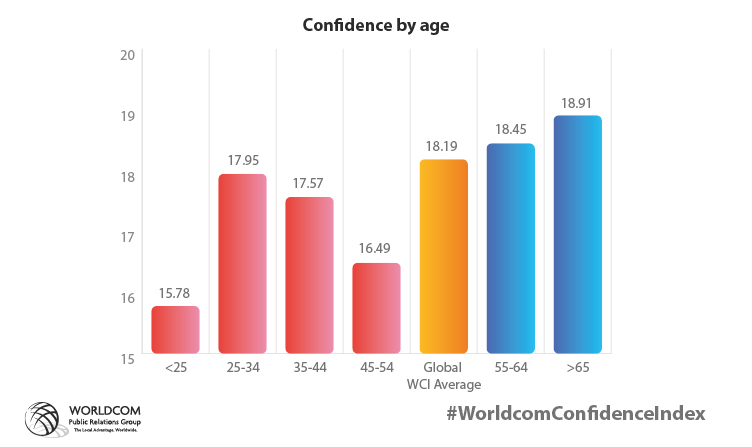 The youngest – those under the age of 25 – saw a big fall (17%) in confidence as the full extent of the pandemic’s impact became clearer in May. 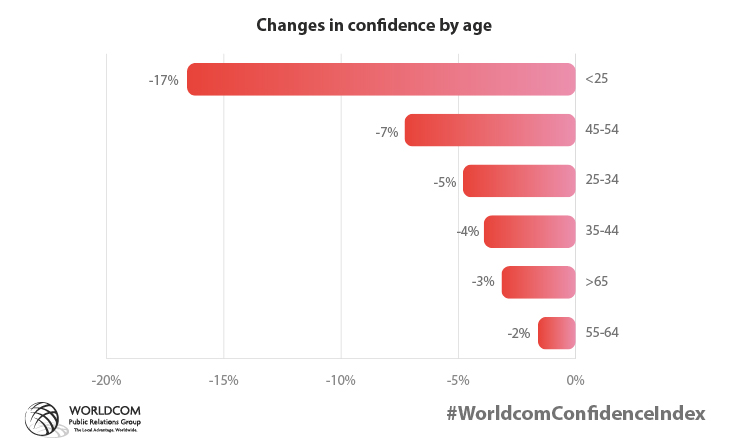 The bottom five topics for confidence were also the five topics of most concern for CEOs and CMOs. This is the first time they have shared the same concerns.

#2 Employee-related topics received more attention from leaders as they adjust their COVID-19 recovery strategies. But confidence in the ability to address them declined

#4 The impact and role of the media saw a 42% increase in engagement by leaders making it the #3 topic. But confidence in handling the media fell by 10%

#5 In the heart of the COVID-19 crisis, confidence in the ability to manage a crisis continued to slide. And, confidence about the impact of the way political leaders communicate on social media continued to leak away

#7 Influencers extended their lead as #1 audience for leader attention – up 10% since April, but customers, employees and governments also saw increases in attention

As for the 2019 Worldcom Confidence Index, the study was able to operate at this scale, and in nine different languages, because the data was captured using a breakthrough approach powered by artificial intelligence (AI), which allowed us to discover the issues that concern leaders – and their confidence levels in addressing them. The chosen research firm, Advanced Symbolics Inc. (ASI), has developed a patented method of building representative samples and then capturing information with their AI tool. By using ASI’s AI tool, we have produced a truly global perspective on the business issues of the moment and where they rank in terms of leadership attention. We’ve also calculated the confidence index level for every topic and audience and identified how this changes around the world. This is incredibly valuable insight because it not only represents what leaders are talking about, rather than responses to questions, but also shows their confidence or concern in addressing each topic. It means you can compare your own thoughts with more than 54,000 of your global peers.