END_OF_DOCUMENT_TOKEN_TO_BE_REPLACED

Presentation of prostate cancer at metastatic stage in Turkey(17%)1 is higher than Western countries eg vs Spain(4%)2. There are also remarkable differences on age adjusted prostate cancer incidence rates in different cities of Turkey varying from 17.7% to 43.7% (Table 1 and 2).1 This suggests that prostate cancer awareness may not be the same in each city of Turkey.  Statistics show that almost all patients with initial local disease are expected to be alive after the 5th year of diagnosis, whereas only 1/3 of patients presenting with metastatic prostate cancer would survive.3 Therefore, early diagnosis is very important to eradicate the silent killer of men in Turkey.

To draw attention to the prevalence of prostate cancer and to highlight the importance of early diagnosis, the Turkish Medical Oncology Association partnered with our client ‘Astellas’, a global pharma company that offers medical solutions for prostate cancer. We were hired to create a campaign that highlights the importance of early diagnosis in the treatment and increase awareness on the topic.

Breaking through the embarrassment barrier

During the research phase of the campaign it became clear that ‘prostate cancer’ is a ‘taboo’ subject in Turkey, especially in the rural areas. To be able to highlight the importance of early treatment, we first needed to make sure that men are comfortable talking about it. Their perception of  prostate cancer is that it represents a threat to their manhood. They are ashamed of speaking about the disease or asking for help.

In a conservative culture, where pushing the limits of the status quo is difficult, this was a significant challenge. We needed to make sure men understood that prostate cancer is common among their peers and it is OK to ask for support. We also needed to convey that the disease is treatable when detected early.

The campaign began in 2018 and has evolved each year based on the achievements of the previous year.

In 2018, after the research phase, we realized we needed the support of thought leaders to change the perception of this taboo issue. People who suffered from the disease needed both courage and a platform to speak about the disease. We decided to create a sense of community for sufferers and encourage them to ‘come out of the closet.’ Based on ‘persuasion requires wisdom’ approach, we decided to organize a public event targeting a more educated group. After an in depth search, we decided to sponsor the Turkish leg of “The Distinguished Gentleman’s Ride” (organized worldwide) and enhance it with our own campaign. “Wear a Blue Tie” (Light blue is the color of the prostate cancer charity and a tie was chosen as a manly symbol to be promoted like the pink ribbon for breast cancer). 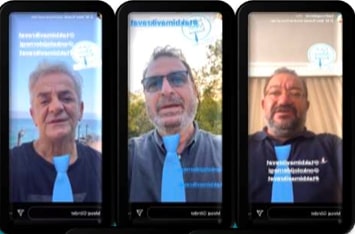 Participants wore blue ties & bow ties during the ride.  The initial phase was a huge success – reaching around 14M people. We collaborated with Esquire magazine and increased the reach and appeal of the ride with celebrities riding classic bikes. We also secured prime-time broadcast interviews for the head of the oncology society.

In 2019, we built on the success of the first year by taking the campaign to more regional areas of Turkey. We decided to create very strong brand awareness by dressing the ‘iconic buildings’ of major cities with a blue tie – thus connecting to locals’ hearts & minds. We secured support from local government so we could create meaningful connections with local communities. By organizing events in Istanbul, Ankara and Izmir we reached over 17 million people in the second year of the campaign.

In 2020, after the COVID-19 pandemic hit, we were unable to continue our campaign in other Anatolian cities but that did not stop us. We switched our focus from a physical presence to a social media campaign. We created an AR Instagram filter & story campaign with middle aged male influencers and sports media. Sponsored video content was implemented in social channels including Instagram, Twitter, Facebook and Sports Media. Both traditional & social media were used effectively and our reach for the year grew to 21 M.

As the awareness of the campaign increased, our reach soared. Every year we have witnessed systematic growth and our total reach so far is 52M and 1.2M estimated ad value.

Our strategy of using iconic local buildings highlighted the importance of establishing partnerships with local government during national projects.

We have secured over 560 media placements. As a result, awareness of the prostate cancer has improved significantly during the campaign.  This has converted into many inquiries for the medical association and the relevant physicians as desired (for early diagnosis).